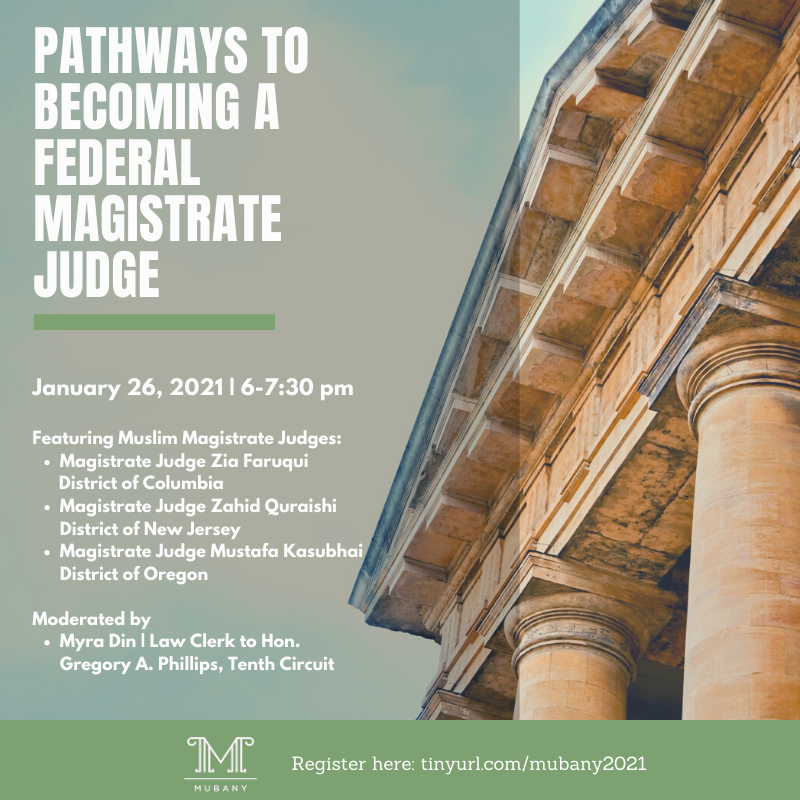 Mustafa Kasubhai was the first Muslim judge appointed to the federal judiciary. He has demonstrated a enduring commitment to public service. He has been serving the U.S. District Court for the District of Oregon as a United States Magistrate Judge since September 2018. Prior to his appointment, he served as an Oregon State Circuit Court judge for over ten years.  In 2003, Oregon’s governor appointed Judge Kasubhai to serve on the Oregon Worker’s Compensation Board in Salem Oregon, where he served as an appellate decision maker. Judge Kasubhai began his legal career in private practice, representing injured workers, plaintiff’s tort litigation and labor union representation as the sole shareholder in the Law Offices of Mustafa T. Kasubhai, PC. Judge Kasubhai graduated from the University of Oregon Law School in 1996 where he was an editor on the Oregon Law Review, President of the Student Bar Association, and Co-Director of the Minority Law Students Association. He earned his undergraduate degree from the University of California, Berkeley in 1992. He is a prolific writer and speaker who has published articles and delivered numerous presentations on the topics of diversity and equity on the bench and in the legal profession, judicial independence, consent, as well as other topics related to civil litigation.  He is a co-author of a forthcoming essay entitled, “Is there a Place for Us in Oregon?  Muslim-Americans in the Legal Profession.”

Judge Faruqui has been serving as a United States Magistrate Judge for the U.S. District Court for the District of Columbia since September 2020.  Prior to his appointment, he was a decorated federal prosecutor, first in the United States Attorney’s Office for the Eastern District of Missouri and then in the District of Columbia. Over the span of over twelve years of federal service as an AUSA, Judge Faruqui prosecuted numerous criminal cases, most recently serving as the lead prosecutor for complex and novel crimes involving terrorists’ use of cryptocurrency, nuclear weapons proliferation, darknet sites dedicated to child exploitation, and antiquities theft. He also litigated over $700 million in money laundering and asset forfeiture proceedings. As a subject-matter expert, he has presented on cryptocurrency and anti-money laundering issues in conferences spanning from Europe to Asia and the Middle East.  Prior to serving as a federal prosecutor, Judge Faruqui worked at the corporate law firm, Willkie, Farr & Gallagher, LLP, where he focused on government investigations and general commercial litigation. Judge Faruqui is a board member for Jobs for Homeless People, a non-profit that provides housing and vocational training to people in the D.C. metropolitan area. He also served as a Muslim-outreach coordinator for the Department of Justice and an as an adjunct professor at Harris-Stowe State University. He received his J.D. and undergraduate degree from Georgetown University in 2004 and 2001, respectively.

Judge Quraishi has been serving as a United States Magistrate Judge for the U.S. District Court for the District of New Jersey since June 2019. Prior to his appointment, he was Chair of Riker Danzig LLP’s White Collar Criminal Defense and Investigations Group and the firm's first Chief Diversity Officer. His practice focused on white-collar criminal defense, internal corporate investigations, and complex civil litigation. Before that, Judge Quraishi served as an Assistant United States Attorney in the District of New Jersey for over five years. In that role, he tried cases involving public corruption, financial fraud, perjury, firearms, and narcotics offenses. Prior to being an AUSA, Judge Quraishi represented the United States as an Assistant Chief Counsel and trial attorney with the Department of Homeland Security. He also served as a military prosecutor and achieved the rank of Captain in the U.S. Army Judge Advocate General’s Corps. In the Army, Judge Quraishi was assigned to the First Infantry Division, stationed in Germany, and deployed to Iraq in support of Operation Iraqi Freedom in 2004 and 2006. Earlier in his career, Judge Quraishi worked as a litigation associate at LeBoeuf, Lamb, Greene & MacRae, LLP and clerked for the Honorable Edwin H. Stern, Presiding Judge, Superior Court of New Jersey - Appellate Division. Judge Quraishi received his law degree from Rutgers Law School - Newark, where he is now an adjunct professor, and was the Managing Business Editor of the Rutgers Computer and Technology Law Journal and a member of the Rutgers Moot Court Board.